Leh is the joint capital and largest town of the union territory of Ladakh in India. Leh, located in the Leh district, was also the historical capital of the Himalayan Kingdom of Ladakh, the seat of which was in the Leh Palace, the former residence of the royal family of Ladakh, built in the same style and about the same time as the Potala Palace in Tibet. Leh is at an altitude of 3,524 metres (11,562 ft), and is connected via National Highway 1 to Srinagar in the southwest and to Manali in the south via the Leh-Manali Highway.

People of Leh with traditional dress

Leh was an important stopover on trade routes along the Indus Valley between Tibet to the east, Kashmir to the west and also between India and China for centuries. The main goods carried were salt, grain, pashm or cashmere wool, charas or cannabis resin from the Tarim Basin, indigo, silk yarn and Banaras brocade.

Although there are a few indications that the Chinese knew of a trade route through Ladakh to India as early as the Kushan period (1st to 3rd centuries CE), and certainly by Tang dynasty, little is actually known of the history of the region before the formation of the kingdom towards the end of the 10th century by the Tibetan prince, Skyid lde nyima gon (or Nyima gon), a grandson of the anti-Buddhist Tibetan king, Langdarma (r. c. 838 to 841). He conquered Western Tibet although his army originally numbered only 300 men. Several towns and castles are said to have been founded by Nyima gon and he apparently ordered the construction of the main sculptures at Shey. "In an inscription, he says he had them made for the religious benefit of the Tsanpo (the dynastical name of his father and ancestors), and of all the people of Ngaris (Western Tibet). This shows that already in this generation Langdarma's opposition to Buddhism had disappeared.Shey, just 15 km east of modern Leh, was the ancient seat of the Ladakhi kings.

During the reign of Delegs Namgyal (1660–1685), the Nawab of Kashmir, which was then a province in the Mughal Empire, arranged for the Mongol army to temporarily leave Ladakh, though it returned later. As payment for assisting Delegs Namgyal in the Tibet-Ladakh-Mughal war of 1679–1684, the Nawab made a number of onerous demands. One of the least was to build a large Sunni Muslim mosque in Leh at the upper end of the bazaar in Leh, below the Leh Palace. The mosque reflects a mixture of Islamic and Tibetan architecture and can accommodate more than 500 people. This was apparently not the first mosque in Leh; there are two smaller ones which are said to be older.

Several trade routes have traditionally converged on Leh, from all four directions. The most direct route was the one the modern highway follows from the Punjab via Mandi, the Kulu valley, over the Rohtang Pass, through Lahaul and on to the Indus Valley, and then downriver to Leh. The route from Srinagar was roughly the same as the road that today crosses the Zoji La (pass) to Kargil, and then up the Indus Valley to Leh. From Baltistan there were two difficult routes: the main on ran up the Shyok Valley from the Indus, over a pass and then down the Hanu River to the Indus again below Khalsi (Khalatse). The other ran from Skardu straight up the Indus to Kargil and on to Leh. Then, there were both the summer and winter routes from Leh to Yarkand via the Karakoram Pass and Xaidulla. Finally, there were a couple of possible routes from Leh to Lhasa.

The first recorded royal residence in Ladakh, built at the top of the high Namgyal ('Victory') Peak overlooking the present palace and town, is the now-ruined fort and the gon-khang (Temple of the Guardian Divinities) built by King Tashi Namgyal. Tashi Namgyal is known to have ruled during the final quarter of the 16th century CE.The Namgyal (also called "Tsemo Gompa" = 'Red Gompa', or dGon-pa-so-ma = 'New Monastery'),a temple, is the main Buddhist centre in Leh. There are some older walls of fortifications behind it which Francke reported used to be known as the "Dard Castle." If it was indeed built by Dards, it must pre-date the establishment of Tibetan rulers in Ladakh over a thousand years ago.

The Sankar Labrang (Bsam dkar bla brang) is a small, two-storeyed building owned by Sankar monastery. Sankar monastery is the seat of Bakula Rinpoche, immediately to the northwest of Leh. The monastery’s Labrang building is located in the old town of Leh, in the Manikhang neighbourhood. Manikhang is the area between the main bazaar of Leh and the historic Stalam path that leads up to the royal palace. Four huge stūpas standing at this point mark the beginning of historic Leh. In recent memory, the Sankar Labrang had a metalsmith’s workshop downstairs, while upstairs lived the monk caretaker of the White Maitreya Temple (Byams khang dkar po), also known locally as “Street Maitreya”. The White Maitreya Temple dates back to the reign of King Drakpa Bumd´e (Grags pa ’bum lde, r. ca 1410–1435), following the arrival of a mission sent to Ladakh by the Tibetan lama Tsongkhapa

The Old Town of Leh 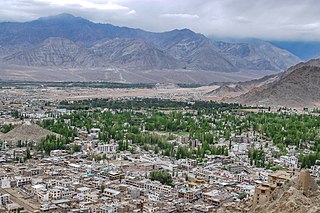 The old town of Leh was added to the World Monuments Fund's list of 100 most endangered sites due to increased rainfall from climate change and other reasons.Neglect and changing settlement patterns within the old town have threatened the long-term preservation of this unique site.

The rapid and poorly planned urbanisation of Leh has increased the risk of flash floods in some areas, while other areas, according to research by the Climate and Development Knowledge Network, suffer from the less dramatic, gradual effects of ‘invisible disasters’, which often go unreported.

Leh and its surroundings

Mountains dominate the landscape around the Leh as it is at an altitude of 3,500m. Peaks, such as Nanga Sago, can reach well above 5,500m. The principal access roads include the 434 km Srinagar-Leh highway which connects Leh with Srinagar and the 473 km Leh-Manali Highway which connects Manali with Leh. Both roads are open only on a seasonal basis. Although the access roads from Srinagar and Manali are often blocked by snow in winter, the local roads in the Indus Valley usually remain open due to the low level of precipitation and snowfall.

Leh has a cold desert climate (Köppen climate classification BWk) with long, cold winters from late November to early March, with minimum temperatures well below freezing for most of the winter. The city gets occasional snowfall during winter. The weather in the remaining months is generally fine and warm during the day. Average annual rainfall is only 102 mm (4.02 inches). In 2010 the city experienced flash floods which killed more than 100 people