The town of Kaza or Kaze is the subdivisional headquarters of the remote Spiti Valley in the western Himalayas in the Lahaul and Spiti district of the northern Indian state of Himachal Pradesh. Spiti is a high altitude or cold desert having close similarities to the neighbouring Tibet and Ladakh regions in terms of terrain, climate and the Buddhist culture. Kaza, situated along the Spiti River at an elevation of 3,650 metres (11,980 ft) above mean sea level, is the largest township and commercial center of the Spiti valley.

The town is divided into the old, as Kaza Khas and new as Kaza Soma sections. The new town contains the administrative buildings. The Tangyud (Tang-rGyud) Gompa dates to the early 14th century and is built like a fortified castle with massive slanted mud walls and battlements with vertical red ochre and white vertical stripes. It is on the edge of a deep canyon and overlooking the town of Kaza, 4 km from the town.[1][2] Approaching it from the south one sees Kyu-ling (Skyid-gling), the stately palace of the Nono (king) on the other side of the river. 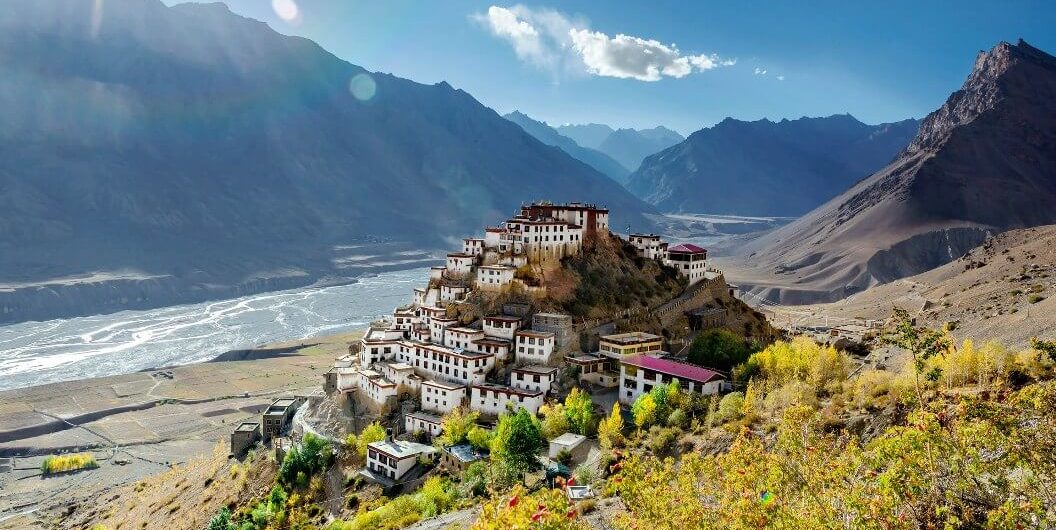 Kaza is known for its colorful festivals and the ancient Sakya Tangyud Monastery, 14 km from the town. It is also popular with tourists and adventure seekers during the period of June, July and August and September because of its central location and connections to the rest of the valley (Connects to Leh-Manali Highway via Kunzum Pass). This central location also makes Kaza an ideal base camp for trekking, mountaineering, and tours directed to other parts of the valley.

Festivals like Fagli and Gochi are celebrated. Hindus also celebrate their festivals like harvest festival, festival of light. There are various fairs like Ladarcha fair, Pauri fair, Tribal fair and Tsheshu fair. Kaza’s Ladachar Fair, Lauhal and Spiti in Himachal Pradesh are the most renowned fairs of the place, these fairs indicate the termination of summer season in the region.

Previously, Ladarcha fair used to be celebrated  in Kibbar maidan in Spit in the month of July where traders from  Ladakh, Rampur Busher and Spiti meet in this fair to barter their produce. Due to closure of Tibetan traders, this fair is  now being celebrated at Kaza, the headquarters of Spiti Sub Division in the 3rd week of August. A large number of visitors  and traders from Kullu/ Lahaul/ Kinnaur meet there. It has now  become a conference of cultures of Spiti, Ladakh & Kinnaur as also of the Indian plains.